When listing the makers of fine concert level grand pianos, the name “Everett” is normally not among them. Mainly known for their upright pianos built in South Haven, Michigan, Everett was later purchased by Yamaha in one of the Japanese company’s forays into the North American market. However, prior to this, Everett was a Boston based company that manufactured heavily built, premium quality upright and grand pianos. Unfortunately, much of the information regarding the early days of Everett have passed into history.

Everett Concert Grand Piano #284 is one of the most interesting concert grand pianos we have ever had the pleasure of rebuilding. This instrument features bass strings that are a full foot longer in places than a Steinway Model D! Featuring an incredibly wide cabinet, this piano casts an imposing figure. The art case cabinet features moldings around the lower part of the case and it sits on tapered, carved legs with clean, simple capitals. The piano features locks for both the fallboard and lid. Almost ‘over built’, great care was obviously taken during the construction of this huge piano. The Interior of Everett Concert Grand #284 A new solid spruce soundboard was installed along with a new custom fitted rock maple pinblock. The pinblock area in the treble section of this piano is so large that it required the equivalent of two normal pinblock panels to complete! The massive cast iron plate was rebronzed and hand lettered. The plate features a high number of plate holes creating a beautiful geometric pattern inside of the case. This also aids in reducing the weight of the instrument. New blued tuning pins were installed along with the highest quality music wire and custom manufactured soft copper wound bass strings. The damper back action was restored and new Renner felts were installed. The cabinet was refinished in a closed pore, hand rubbed satin ebony finish and the nickel hardware was replated. The action was fully rebuilt with new hammers, shanks, flanges and wippens. The piano also features a new custom crafted keyset. Each key was individually weighed off to provide the responsiveness required of the most advanced pianist and a proper touch weight. The piano’s bass section is truly thunderous and the treble rings with a clear voice. Everett #284 is a magnificent example of the golden age of piano building! They simply don’t make them like they used to. It appears that the numbering system for Everett’s concert grand pianos were separate from their production line instruments. If anyone has information regarding the exact date this piano was built or information regarding Everett concert grand pianos in general, please get in touch!

This Everett concert grand piano was fully rebuilt by us for a private client near Richmond, Indiana. Piano Technician Philip Balke working on a Steinway M next to the Everett.

Our expert piano technicians have spent hours beyond the norm ensuring this instrument is of top concert quality. During the pre-WWII era, quality was high and craftsmen had access to the finest cabinet woods and other materials. The level of quality was incredible during this golden age of the piano. This tradition is one we have dedicated ourselves to continuing here at Chupp’s Piano Service.

Our showroom in Goshen, IN. and rebuilding facility in New Paris feature a large selection of fully restored and new pianos for sale. For over four decades our specialty has been the refurbishing, restoration and repair vintage Steinway & Sons grand pianos. The Art of Piano Rebuilding is truly art you can feel! Interested in having your piano fully rebuilt? Get in touch with us today for more information. 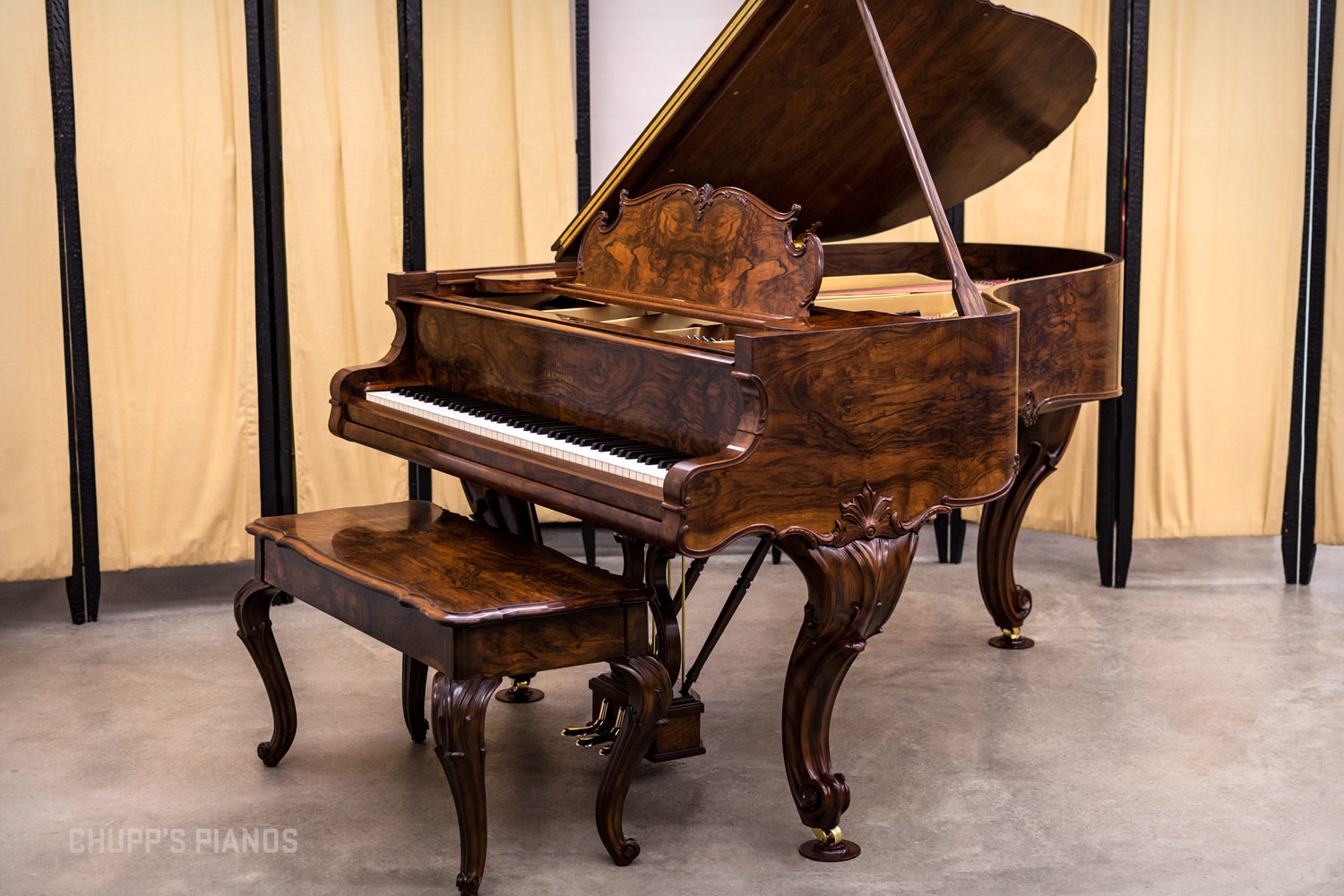 Error: Error validating access token: The session has been invalidated because the user changed their password or Facebook has changed the session for security reasons.
Type: OAuthException
Subcode: 460