For over 168 years, Steinway & Sons has been the leading name when it comes to the crafting of world-class Grand Pianos. Offering models ranging in size from the diminutive Model S to the imposing Model D, Steinway Grand Pianos have become the standard by which other pianos are often judged. Not as well-known however is the company’s selection of upright/vertical pianos they have offered throughout their history.

During the late 19th and early 20th century, large, imposing instruments of close to 55″ in height were built under the designations Model I in North America, and the virtually identical Model R in Europe. Two Art Case Model R uprights, alongside a matching Model B grand were placed into service in the First Class areas onboard the ill-fated RMS Titanic 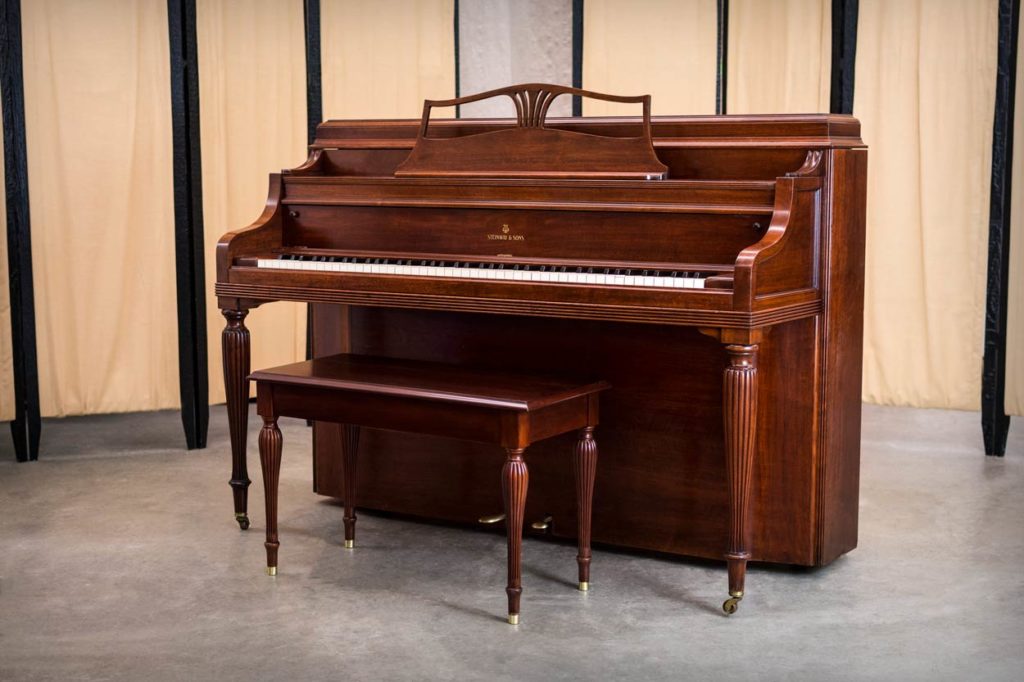 The most popular upright produced by Steinway was a vertical that measured 40″ in height. First dubbed the Model 40, this smaller vertical underwent several variations and model changes during its time in production. 40″ uprights were built by the New York factory between 1939 and 1987. The original Model 40 was first put into production to provide an affordable vertical piano to compete against pianos built by the company’s competitors. Steinway Upright Pianos include a number of the features associated with their grand brethren that have been scaled down and inserted in the vertical design. This results in a quality of tone that can compare to the tone produced by a Steinway grand. Until recently, the Model K, the Model 4510, and the Model 1098 were the upright models produced by the New York Factory. According to Steinway marketing materials, the Model K is currently the only upright piano offered in North America. The Hamburg Factory currently manufactures the Model K and the Model V.

Over the years, Steinway upright pianos have been owned by aspiring and professional musicians throughout the globe. John Lennon purchased what would become the world’s most expensive upright piano, built by Steinway in 1970. This Hamburg Steinway Model Z upright piano was originally sold for $1,500 and was used to compose the song “Imagine” as well as other notable tunes. It later sold for 1.67 million pounds to pop star George Michael. Upright or a Grand?

Although the Steinway & Sons factories have built a number of vertical instruments over their over 160 years in business, they are still best known for their concert-level grand pianos. All things being equal, our usual recommendation is the purchase and restoration of a vintage Steinway Grand when choosing between it or a vertical. This is due to the grand’s better responsiveness.

That said, we have rebuilt and restored a number of Steinway uprights for clients who have a significant attachment to them, require their space-saving design, or prefer them due to aesthetic or performance reasons. Often, an upright piano is a preferred choice when one is concerned about the flow of an apartment or smaller room. [Click here to learn more about a particularly stunning Model #45 Upright Piano we had the pleasure of restoring.]

Our Northern Indiana Rebuilding Facility and Showroom feature a wide selection of fully restored and original condition Steinway instruments. We have over forty years of experience in the piano industry and we stand ready to assist you in finding the piano that is the right fit for you. For more information about our selection and our range of services, get in contact with Chupp’s Piano Service today!

Chupp’s Piano Service, Inc. of New Paris, Indiana is proud to carry the largest selection of vintage, premium restored Steinway & Sons pianos in the Midwest United States. Our Rebuilding Facility and Showroom features an uncommonly fine array of grand and upright pianos of varying vintages and styles. With over forty years of experience in the piano industry, we are ready to help you find the piano of your dreams. Dedicated, knowledgeable, and intentional, our team of craftsmen is proud to continue the historic art of piano work and rebuilding. Contact us today!

For over a year I researched pianos and various dealers. I came upon Chupp’s Piano Service in my search and decided to go and check it out. It was well worth the drive. The workmanship both on the exterior and interior is of the highest craftsmanship quality.” – R. Demming