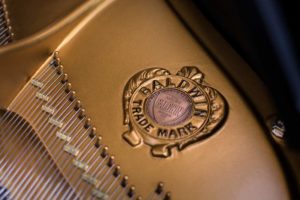 Baldwin Pianos of the ‘golden era’ are considered one of the best sounding and best-playing instruments in the world. Vintage, quality-built Baldwins are known for their responsive touch, tone, and solid durability, and found in musical venues throughout the world. The Baldwin company began manufacturing pianos in the early 1890s, a couple of decades after the company’s founding with the goal of building ‘the best piano that could be built.’

A Baldwin Piano is a product constructed with a blend of historical pride and modern advances. The company has and still utilizes a manufacturing process focused on scale design. This is a formula that is applied to the various materials used in the design and creation of a piano – everything from the shape of the soundboards to the placement of the bridges and ribs, the length of the strings, and the thickness of the rims and bracing.

The Baldwin piano company was founded in 1857 by Dwight Hamilton Baldwin. A Cincinnati, Ohio-based piano, organ, and violin teacher he transitioned towards selling pianos. After initial success in sales, he eventually began the manufacturing of instruments. The D. H. Baldwin company introduced its first upright piano in 1891 and its first grand piano for sale in 1895. D. H. Baldwin died in 1899. His employee and later business partner Lucien Wulsin decided to purchase the Baldwin estate.

“Choose Your Piano As The Artists Do” | Past Baldwin Slogan

The company continued to expand and in 1900 the Baldwin Piano Company won its first award. The Model 112 piano won the Grand Prix at the Exposition Universelle in Paris, France. This was the first American-built piano to win the award. The company continued to pick up awards and acclaim at various shows and expositions. By 1913 Baldwin was exporting pianos to 32 countries besides the United States. Baldwin continued to grow and like others during the 1920s, they joined the ‘fad’ and began the manufacturing of player pianos. The popularity of these instruments helped the company grow greatly, however, the explosion in popularity of the radio put piano sales on the decline. The Great Depression hit the company hard, and it was only through careful planning by the company leadership that allowed Baldwin to ride out the downturn with the company still intact. A feat made possible by the large reserves built up for emergencies like the depression. During the company’s height, Baldwin boasted a solid roster of ‘Baldwin Artists that was second in size only to Steinway & Sons. Notable artists included Bruce Hornsby, Liberace, and Ray Charles. The Baldwin SD-10 Concert Grand was a common sight on performance stages. These beautiful nine-foot pianos were one of the last American-made pianos to compete head to head with Steinway Model D Grands in high numbers.

The prestigious list of Baldwin Artists was encouraged by the company’s large, well-maintained fleet of concert-level grand pianos that were available for pianists’ use around the world. Sadly, this large collection of concert and artists pianos ceased to exist upon the company’s 21st-century bankruptcy. Combined with the ceasing of production in the United States, this led to the end of the Baldwin Artist roster.

The Baldwin Piano Company Today | The End of American Production Progressing times and tastes led to many changes at Baldwin. The company introduced its first electric organ in 1946 and continued to be a leader in the piano manufacturing industry. They dabbled in guitars beginning in 1965, however, the sales proved to be disappointing. Beginning in the 70s, Baldwin began a massive undertaking to diversify and by the early 1980s piano manufacturing made up very little of Baldwin’s revenues. The company went on a roller coaster ride financially and in 2001 was purchased by the Gibson Guitar Company. Sadly the end was near for the Baldwin company as it had been. In 2008, Baldwin ceased the manufacturing of new pianos at their United States facilities keeping only a handful of employees on board to finish up pianos that had already been ordered. New pianos in the Baldwin lineup are now manufactured overseas in China. An end of an era for one of America’s leading piano manufacturers.

Many musicians and concert pianists have chosen to utilize Baldwin pianos over the years in their work. These include musicians and composers like Earl Wild, John Williams, Leonard Bernstein, Carly Simon, and more. The roster of Baldwin Artists at one point was quite large. At their height, Baldwin was second to only Steinway & Sons in the number of artists playing and composing on their pianos. Piano’s bearing the Baldwin name have made themselves the center of many family’s musical lives over their many decades of quality. Chupp’s Pianos’ owner Dennis Chupp grew up with a Baldwin piano in the family living room! (Chupp’s Piano Media Director Benjamin Rogers also learned to play on an older Baldwin Upright.) Baldwin’s contribution to the golden age of the piano should not and frankly cannot be ignored. Quality Baldwin Pianos are described as having a big American sound, with a clear, bell-like quality in the high treble end.  A variety of different styles of pianos, including grands, artist grands, concert and semi-concert, and pro series verticals are still produced under the Baldwin name. During the company’s peak they were second only to Steinway & Sons in the number of artists on their roster.

Vintage Baldwin pianos continue to be highly respected and the company continues to be known for its ability to make piano ownership available to people from all walks of life. We have rebuilt a number of these beautiful instruments for private clients, churches, and museums. [Click here to learn about the Baldwin Grand Piano we restored for the Ruthmere Museum in Elkhart.] If you would like to own a Baldwin Piano, contact Chupp’s Pianos to learn more! Baldwin
Founded in 1862, the Baldwin Piano & Organ Company has long been among the most respected names in piano manufacturing. American made Baldwin Model R #329557 is a fantastic example of the quality and artistry associated with the Baldwin name. Measuring 5'8" in length, this 'baby' grand piano was built at Baldwin's Conway, Arkansas factory in 1995. This instrument is in all original condition and features a solid spruce soundboard in pristine condition, a satin ebony cabinet in excellent condition and an action that has been fully regulated and voiced by our piano technicians. This 'baby' grand has been sold to a client in Texas. Baldwin
Founded in 1862, the Baldwin Piano & Organ Company has long been one of the most respected names within the piano industry. Baldwin Model C #325497 was built in 1994 here in the United States. This piano has been expertly refurbished by our piano technician's and features a new, custom-fitted pinblock, new strings, and more. The polished ebony cabinet in excellent condition and an action that has been fully regulated and voiced by our piano technicians. Baldwin
Baldwin continues to be one of the most respected names in piano industry history. Boasting a rich history, Baldwin grand and upright pianos have become a welcome and common sight in homes and institutions throughout the world. Baldwin Upright Piano #0485380 was built here in the USA and is in excellent condition. It is available now from Chupp's Piano Service. It will be tuned prior to delivery to your home or institution. This used upright piano sits alongside a number of brand new Kawai and fully restored Steinway & Sons pianos here at our New Paris, IN Piano Showroom. Baldwin
Build in 1910, this Baldwin Model C measures approx. 6'3" in length. The precursor to the later Baldwin Model L, this piano boasts the quality of tone that is expected of an American-made Baldwin Grand. This instrument was recently traded in and is in excellent condition. Currently featured in our New Paris, IN Piano Rebuilding Facility.

Interested in this beautiful Steinway & Sons Model B? Get in touch with Chupp’s Pianos today! This beautiful musical instrument awaits your appointment at our world-class New Paris, Indiana Rebuilding Facility, and Showroom. ... See MoreSee Less

Steinway & Sons Model B #520111 was built at the New York Steinway Factory in 1991. Measuring 6'11' in length the Model B is legendary as a piano well suited for both practice and performance. This pi...
View on Facebook
· Share