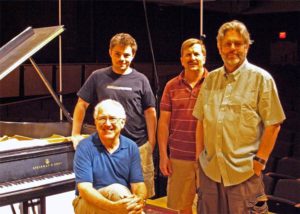 Goshen College’s Sauder Concert Hall is incredibly respected and admired for its beautiful design and outstanding acoustic qualities. With a design inspired by the great concert halls in Europe, it seats 900 and is one of the leading performance venues in the Midwest today. A hall of this elegance and sound standard deserves the best pianos possible. Chupp’s Piano Service fully the vintage Steinway & Sons Model D-274 9′ Concert Grand Piano for Goshen College. These 9′ pianos are beautiful both visually and as musical instruments. The original soundboard was repaired and refinished, the actions were fully rebuilt, the pianos were refinished in a premium closed pore lacquer finish and much more. This concert grand piano was built during the early part of the 20th century, considered to be the golden age of Steinway factory quality. Along with this Model D, seven other Steinways have been rebuilt by us for the college. These pianos have and continue to be utilized by top level concert artists and are an ongoing highlight of Goshen College Music Center’s Sauder Hall. Master Piano Technician Dennis Chupp serves as the head piano technician, tuner and rebuilder for Goshen College. He has been in this position for over two decades and continues to service Goshen College’s entire fleet of pianos.

The Model D Grand Piano is truly the apex of Steinway piano development. These pianos continue to be the instrument by which all other concert pianos are judged. Over 12,000 individual parts work in unison to bring out a quality of tone only a piano bearing the name of ‘Steinway’ can. Chupp’s Piano Service, Inc. is very experienced in working with concert artists, venues and top music programs to ensure they receive a vintage, rebuilt piano of the up most quality. For over four decades our rebuilding work has been focused on providing the very best instruments possible and continuing the legacy of craftsmanship begun at the Steinway & Sons factory. When done properly, a rebuilt piano becomes art you can feel!

Click to read more about our piano rebuilding process.