Testimonial: “It is my dream piano come true.”

"The fit and finish of the case makes the 80 year old piano look like it was freshly minted from the factory..."

In the business of restoring and selling pianos, recommendations and reviews from our friends and clients is always a great encouragement. One of the things that we assist with quite often, is the selection of a piano by a client who lives well outside of our local Northern Indiana region. The team here at Chupp's Piano Service was recently able to provide a beautiful Steinway & Sons Grand Piano to one of these customers. We worked with Randall via email and phone to ensure they received an instrument that met their expectations. Our network of expert piano delivery specialists allows us to deliver across the entire country - and even overseas! Randall was kind enough to send in a letter about the piano and his experience working with Chupp's Pianos. END_OF_DOCUMENT_TOKEN_TO_BE_REPLACED FIND YOUR DREAM PIANO – FROM YOUR COUCH!

During this unprecedented time, we are still able to assist you in your search for your dream piano! Via phone, Facetime, Skype or email, a member of the Chupp’s Pianos team can take you on a virtual journey through our showroom selection of premium rebuilt Steinway & Sons and new Kawai pianos. Interested? Call us at 888-831-5820 or connect with us via our contact form below.…

END_OF_DOCUMENT_TOKEN_TO_BE_REPLACED One of the things that we assist with quite often, is the selection of a piano by a client who lives well outside of our local region. The team here at Chupp's Pianos was recently fortunate enough to be able to provide a beautiful Steinway & Sons Model B Grand Piano to one of these customers. We worked with them via email and phone to ensure they received an instrument that met their expectations. Our network of expert piano delivery specialists allows us to deliver across the entire country - and even overseas! They were kind enough to send in a testimonial about the piano and their experience working with Chupp's Piano Service. END_OF_DOCUMENT_TOKEN_TO_BE_REPLACED

Ring In The Holidays With a New Kawai Piano

As an authorized Kawai Piano Dealer, Chupp’s Piano Service is pleased to offer Kawai’s Holiday Sale Event financing. Both 0% interest and low-interest plans are available on select models of Kawai Grand, Upright and Digital pianos. Now is the perfect time to bring a piano into your home. We were recently fortunate enough to be able to provide a beautiful Kawai Grand Piano to a family in North Carolina. They were kind enough to send in a testimonial about the piano and their experience working with Chupp's Piano Service. It is always a joy to be able to help pair up a 'perfect piano' to a new home!

If you haven’t watched Chupp’s video, “The Garage Piano,” I encourage you to do so. This video showed me Mr. Chupp’s integrity and the heart of this family business, and I immediately knew that I wanted them to rebuild my circa 1891 grand piano. I contacted them right away via their website. Tim Chupp called me back, and we discussed the rebuilding process and the costs involved.

END_OF_DOCUMENT_TOKEN_TO_BE_REPLACED A Political Note… Steinway Pianos in the White House

1600 Pennsylvania Ave in Washington, D.C. The home of the President of the United States... and multiple pianos? Like other countries, music is rooted in American history, so it is no wonder that pianos of various makers have found their way into one of the world's most well known political residences. Since 1903, the showpiece grand piano in the White House has been a Steinway Model D. Read on for more!

Steinway & Sons recognized the honor, prestige, and yes, marketing value that came with having their instrument reside in the home of the President of the United States. The most well-known piano in the White House is a 1938 Steinway & Sons Art Case Model D Concert Grand #300000 veneered in mahogany. Resting on legs resembling American Bald Eagles, this piano features motifs depicting traditional American music. END_OF_DOCUMENT_TOKEN_TO_BE_REPLACED 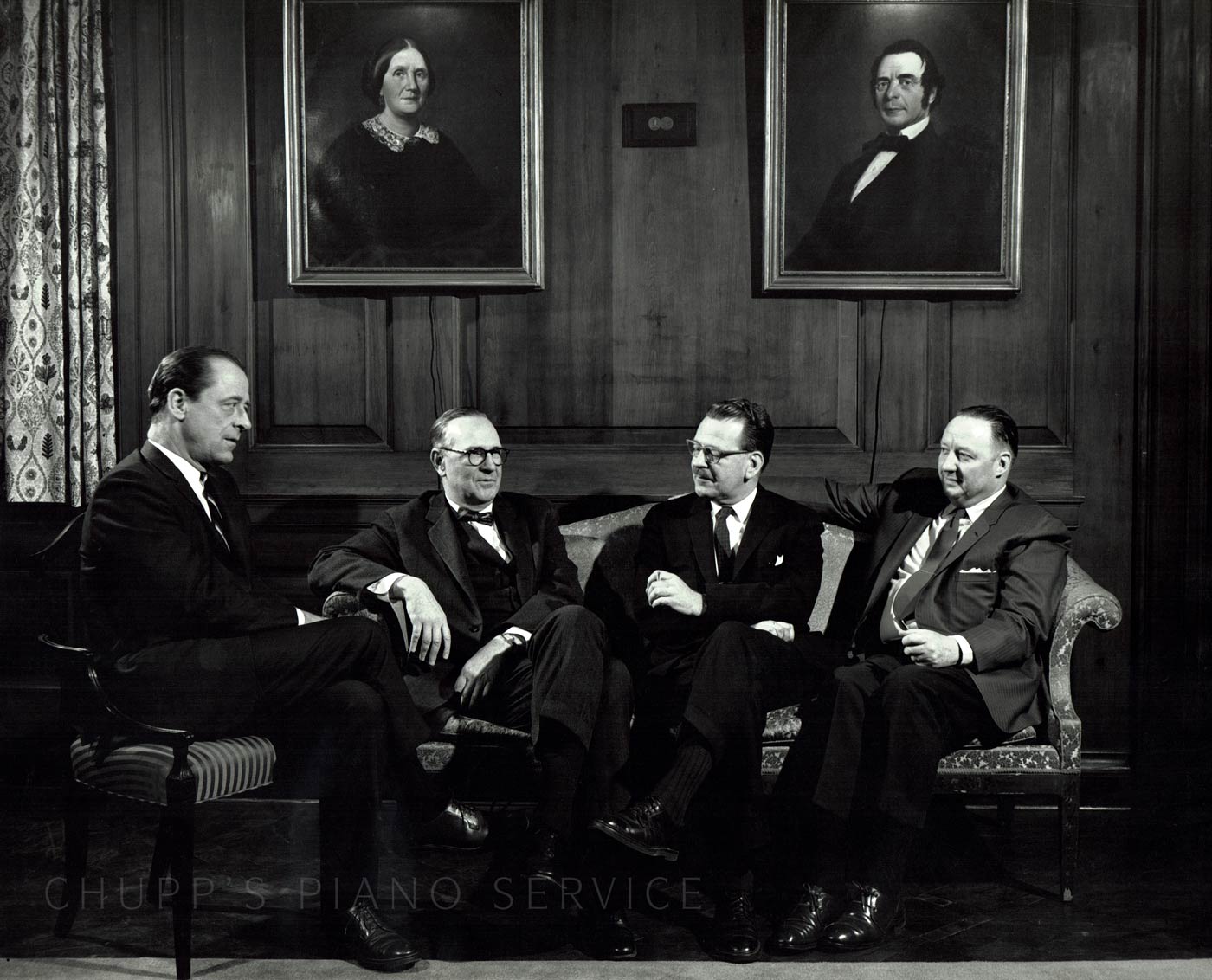 Question: “What's the difference between Steinway pianos built at the company's New York Factory and their Hamburg Factory?"

While Charles Dicken's novel A Tale of Two Cities dealt with the cities of Paris and London, this comparison deals with New York and Hamburg. Specifically, their shared role as the home for Steinway & Sons pianos. This unusual situation has resulted in key differences between the American and European variants of these legendary musical instruments.

Contrary to the belief of some, Steinway & Sons is not a European company and have always been an American company first and foremost. Founded by German immigrant Henry E. Steinway, the New York-based company grew quickly from its modest founding in 1853 to quickly become the leading piano maker in North America. This led to increased demand for their products in both the United States and around the world. As this demand for pianos grew, the decision was made to open a factory overseas and the Steinway name returned to Germany - the City of Hamburg, to be exact.

END_OF_DOCUMENT_TOKEN_TO_BE_REPLACED

“…work was first class – one of the finest restorations.” – Google Reviews of Chupp’s Piano Service

"We can’t believe what a beautiful instrument it is; exactly as represented"

Recommendations and reviews from our friends and clients is always a great encouragement. Read on to view two recent reviews left on our Google Business listing. Thank you to Franklin and Diana for your kind words!

"We purchased our piano from Chupps in 2003 and it has been one of the best purchases we have ever made. We really had to save to buy and restore the Steinway B, but Dennis Chupp patiently helped us to find exactly what we were looking for and he restored it to perfection.   The cost was less than what others had quoted us and the quality of Chupp's work was first-class. Our piano tuner (who is quite noted herself) said it is one of the finest restorations she has seen. She loves voicing and tuning our Steinway.

END_OF_DOCUMENT_TOKEN_TO_BE_REPLACED We were recently fortunate enough to be able to provide a beautiful vintage Steinway & Sons Grand Piano to Sam & Kim Vallery of Little Rock, Arkansas. They were kind enough to send in a testimonial about the piano they purchased from us along with some beautiful photos, which we have included below.

"What a delightful experience it was to come and see your pianos. We had scoured our area (Little Rock) in search of the perfect piano for me, but were left disappointed. We then hit the road. We ended up in Elkhart IN, visited several stores, and saved the best for last. Dennis gave me free rein to play whatever piano I wanted. No pressure, no time frame.

END_OF_DOCUMENT_TOKEN_TO_BE_REPLACED The Baldwin: The Story of a Piano Restoration – Ruthmere Museum & Chupp’s Pianos

Partnering With The Ruthmere to Restore Local History

This historic Baldwin Model M Baby Grand Piano was fully rebuilt by Chupp’s Piano Service. Built in 1938 at the Cincinnati Baldwin piano factory, this grand piano was a family heirloom of the Deputy family, the last residents of the historic Ruthmere Mansion in Elkhart, Indiana. (In fact, one of their family portraits at the museum shows the family sitting around this very piano.) The piano is believed to have been moved out of the mansion in 1969. Recently, the Deputy family generously donated the Baldwin piano to the Ruthmere Museum, returning it to its former home. This is the story of a historic piano’s full restoration. Producer/Shooter/Director: Benjamin Rogers - Music Written & Performed by Philip Balke - Special thanks to The Ruthmere Museum of Elkhart, IN. END_OF_DOCUMENT_TOKEN_TO_BE_REPLACED

Quick Facts about the Steinway Model B | Infographic

The Steinway & Sons Model B - The World's "Perfect" Piano

For over 160 years, the name "Steinway" has represented the finest quality in the piano industry. Founded by Henry E. Steinway, the company quickly became a leader in both craftsmanship and innovation. One of the company's most legendary pianos is the 'seven-foot' Steinway Model B. This model of musical instrument is found in homes, institutions and performance venues around the world. View the infographic below to learn a bit more about this legendary piano. [Click the infographic to expand.] END_OF_DOCUMENT_TOKEN_TO_BE_REPLACED

If there was one quality that marked the early days of Steinway & Sons, it was the family company’s inherent desire to invent, tweak and improve the quality of their pianos. This led to famous innovations and improvements to grand piano design that continues to be standard a century later. Almost all of the company’s patents were filed during these first years. The study of the lineage of the modern grand piano is a fascinating one, filled with stories of both success and failure. The 'Teflon Era' will forever remain an infamous time for Steinway & Sons, but one that forced the industry to adapt around new ideas and parts.

During the early 1960s, work began on another project that company leadership hoped would again boost the company’s reputation as a world leading instrument. Continued pressure from less expensive yet high-quality pianos from Japanese makers like Yamaha and Kawai began to push Steinway from their position as the North American piano king. (This battle between the ‘east and the west’ wages on even today. ) A number of their major American competitors were either long gone or in decline. A document provided to Chupp's Piano Service proves interesting. In a letter dated April 6th, 1979 to the late Ed Hendricks, a former Vice President of Marketing and owner of Hendricks’ Pianos in Chicago,....

END_OF_DOCUMENT_TOKEN_TO_BE_REPLACED

The holiday season is here! Below are a number of videos we have produced, featuring Christmas music. Enjoy!

"Have Yourself a Merry Little Christmas" played on a vintage Steinway Model O Grand Piano by Benjamin Rogers. This classic Christmas song was written by Hugh Martin and Ralph Blane. The piano was built in 1918 at the New York Steinway Factory and features a figured African Flame Mahogany cabinet. It is currently awaiting purchase or restoration at our New Paris, IN. Rebuilding Facility.

Philip performing 'Carol of the Bells' on an Art Case 1917 Steinway & Sons Model B Grand Piano. [George Winston arrangement.] Carol of the Bells was written by Ukrainian composer Mykola Leontovych in 1914. The piano was built during the height of the golden age of piano manufacturing and features a rich, Circassian Walnut cabinet in a Louis XV style. Art Case pianos like this represent the very finest in piano craftsmanship.

END_OF_DOCUMENT_TOKEN_TO_BE_REPLACED

The art of piano restoration is more than simply swapping parts. The definition of rebuilt (amount of work actually done on the piano and the associated quality) varies a lot in the industry. Premium brands like Steinway and Mason & Hamlin are among the pianos most likely to warrant an extensive restoration. This infographic touches on some of the basics that go into a full, Steinway piano restoration. Scroll through the handy infographic to learn more about the rich history and work that goes into the restoration of vintage pianos. [Click the infographic to expand.] END_OF_DOCUMENT_TOKEN_TO_BE_REPLACED
← Older Posts